Leaders can be Found Anywhere and Everywhere 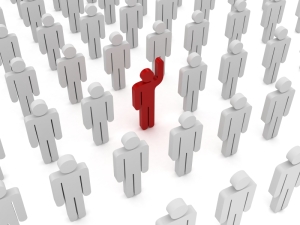 As information about the tragedy in Boston emerge one of the things that struck me most was the number of people who ran towards the site of the bombing.  Sure people ran away, but many turned to help.  Some were obviously first responders who are trained and who accepted the duty to render aide.  Others however were ordinary people who performed extraordinary acts.  While these acts inspired me and provided proof that there are many good and fearless people in the world, it also reminded me that leaders can be found throughout all levels of an organization.

Being a leader means that you are willing to step up and take action.  It’s more than just a title; in fact there are people who are in leadership positions that really do not lead anyone.  They may command action due to their title and position but people aren’t inspired to follow them anywhere.

True leaders are people who inspire others to take action and move in a common direction.  I’ve seen this from a factory floor to corporate offices, in schools and on youth sports teams.  If you step back and watch behaviors there will be a person in a group that everyone else looks to for guidance and direction.  At times they aren’t even really aware that others are following them, they just do what’s right because that’s who they are.  This draws people in and results in others adopting their attitudes and behaviors.

Unfortunately at times the people who become defacto leaders have great charisma but are self-centered and only have their interests in mind.  These people can lead folks down an ugly path.  The good news is that while these people exist they typically don’t have great influence over many people for very long.  Good people realize the intent is off and pull away.

The challenge for organizations is to identify the informal leaders who are shaping the thoughts and actions of those around them and ensuring they are engaged in moving the company forward.  Too often management underestimates the power of the informal leaders and works to direct everyone’s actions without using these valuable resources to provide momentum.  Tapping into the leadership found at every level of your organization will help create a uniform culture, makes it easier to introduce change effectively and can provide critical insights into the problems within the company.

Remember that anyone can lead from anywhere in your organization.  Encourage people to step up and help direct the actions of their team or department, particularly those who do not have a position that means they have a responsibility to lead others.  The informal leaders have great influence on those around them and can make or break a change initiative.   Just like ordinary people can be heroes in times of disaster, ordinary people can be inspiring leaders.  Find them in your organization and celebrate their contributions.

How do you encourage informal leadership?